Maria Victoria Henao was the wife of Pablo Escobar, a drug trafficker from Colombia. Maria, who married Pablo Escobar at the age of 15, was with him for 17 years until his death.

Before his death, Pablo Escobar amassed an estimated $30 billion in wealth, which is equivalent to $64 billion in 2022 purchasing power. For the rest of the world, Pablo Escobar is a criminal, but for Maria, he was her prince charming who adored and nurtured her as if she were a princess.

Every Detail Regarding Maria Victoria Henao

Maria Victoria was born in Palmira, a small hamlet in Colombia, in 1961. She used to adore dancing and had two siblings.

Carlos, the brother of Maria, was a cocaine trafficker for Pablo Escobar. In 1974, she met Pablo Escobar for the first time through her brother Carlos when she was 13 years old. She eventually fell in love with Pablo, 11 years her senior.

Maria stated that her future spouse exerted much effort to seduce her. Whenever they met, he would offer her gifts such as a yellow bicycle or something else of interest and serenade her with romantic tunes.

When her family objected to their relationship since they were aware of Pablo’s illicit activities, they decided to secretly elope and marry. She became a mother at the age of 16 barely one year after her marriage at the age of 15.

In her book titled “My Life with Pablo,” she labelled Escobar as “Affectionate” and “Gentleman” and said of their connection, “He made me feel like a fairy princess, and I was convinced he was my Prince Charming.”

In 1984, she has her second child after seven years. Pablo was having extramarital affairs with a number of women, and his liaison with the Columbian novelist and journalist Virginia Vallejo was widely known because she was the first television journalist to interview Pablo.

Maria believed that Pablo was in the real estate business, despite the fact that he was known as “The King of Cocaine” and was the wealthiest criminal in the world. During the early years of their marriage, Pablo did not reveal his occupation to his wife, despite her suspicions that he was spending extended periods of time away from home and returning with large sums of money.

When he was arrested in 1977, she was surprised to learn of his drug transactions and criminal activities. Maria remained in a relationship with Pablo until his horrific assassination in 1993. She was initially uninterested in participating in her husband’s illicit activities and began to despise anything associated with her husband’s world. She was distressed by her husband’s numerous affairs with several women.

Pablo Escobar Killed by Police: During their 17-year marriage, she and the entire country of Colombia endured a great deal of suffering owing to her husband’s actions. She was unable to seek assistance from her family because she severed all ties with them in order to marry him. She did not abandon him despite the fact that she may have believed she could not survive without Pablo’s support.

Pablo was engaged in the murders of the minister of justice Rodrigo Lara Bonilla and the presidential candidate Luis Carlos Galán. When Maria learned of this agreement, she wrote in her book, “I realised we were in a tremendous trouble that day. My life and those of my children will be challenging.” She lived in continual terror of being murdered by her husband’s enemies.

Pablo Escobar realised in 1993 that he may be killed at any moment, so he instructed Maria to relocate with their children to a safe location under government protection. Pablo Escobar was killed by police in a gunfight on a Colombian rooftop. With the aid of the Colombian electronic surveillance squad, the police determined his exact location by tracing his cell phone communication. However, Juan Escobar, son of Maria, believes his father committed suicide and took his own life. 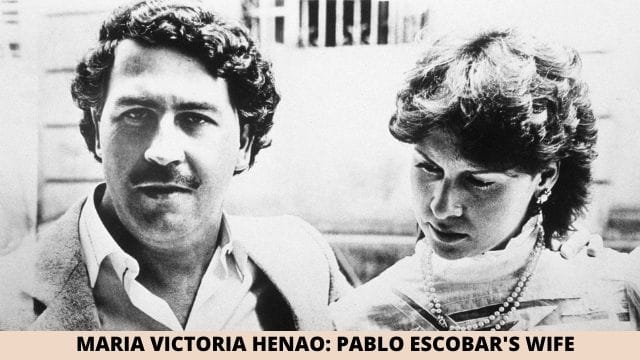 After Pablo’s death, Maria and her children’s lives were extremely challenging. While Colombians and people in other parts of the world celebrated Pablo Escobar’s death, Maria and her family mourned his passing in silence and terror. She desired to settle down in a city and live a quiet life, but Pablo’s reputation prevented her from doing so.

Therefore, she had to repeatedly relocate in order to ensure the safety of her family. She formerly used secret names for herself and her children, and she relocated to Argentina. In 1999, she and her family were arrested despite having taken additional steps to conceal their identities by maintaining a low profile. They have been charged with theft and money laundering.

According to the police investigation, Maria knew Pablo’s business secrets and was also involved in narcotics trafficking. She disputed the charges, alleging that they were without merit and that she was only his wife who was not involved in any of his illicit activities. Due to a lack of evidence, the police were forced to release Maria and her children 15 months after their arrest. Later, they were arrested for assisting a narcotics trafficker with money laundering.

Juan Escobar, the son of Maria, is a lecturer and the author of the book Pablo Escobar: My Father. Maria currently shares an apartment with her son and mother-in-law. Her daughter dissolved family ties and now lives independently.

In an interview with Colombia’s W Radio in 2018, Maria Victoria Henao apologised on her husband’s behalf for his criminal and terrorist operations that caused chaos in the lives of countless civilians after nearly two decades of quiet.

Pablo has set aside a substantial sum of money to provide for his family, but the whereabouts of this money remain a mystery. Few of his properties and other assets were confiscated by police enforcement. However, numerous tangible valuables, including Gold, Platinum, and cash, could not be located.

Maria Victoria Henao recalls drug lord Pablo Escobar as a devoted husband. Despite knowing about his infidelity, she kept a close relationship with him through thick and thin.

Germany and Mozambique denied Maria and her family refuge, forcing them to settle in Buenos Aires, Argentina. Mara Victoria Henao, her son, and Pablo’s mother currently reside in an apartment in Buenos Aires under the aliases Mara Isabel Santos Caballero or Victoria Eugenia Henao.